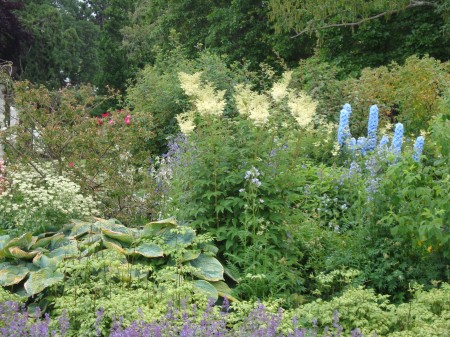 Just why has Comfrey, Symphytum officinale, become a forgotten herb?  Its value as a healing medicine has been recorded over a long period of time.  It has a long arm of proven efficacy as a healer of burns, a soother of the digestive tract, a strengthener of the teeth,  a healer of broken bones, and is a great tonic for falling hair and brittle nails.  And this is why Comfrey was known as The ‘Miracle’ herb.

Comfrey is high in Silica, which is a healing component.  Another aid to healing in Comfrey is the component Allantoin, which is a cell-proliferant. A cell-proliferant encourages the cells of the body to grow again:  bone growth, skin repair, and hair and nail growth are all affected beneficially by the Allantoin in  Comfrey, as well as its abundant silica.   And Comfrey has Mucilage, a slimy material which helps healing.   This means that Comfrey, with its Allantoin and Silica, and Mucilage, and Vitamins, is truly a ‘Miracle Herb’.   Comfrey can heal just about anything.

Well – I will explain why Comfrey has become a forgotten herb:  The reason is because  Comfrey was such a valuable household remedy, it often took away the need to visit the doctor and get a prescription medicine.  Which meant that both doctor and drug company were deprived of quite a lot of money, if you consider how many people were using home remedies, such as comfrey, during the 1980’s and 1990’s.

‘Research’ into Comfrey was, I think, manipulated by the drug companies to achieve a specific result, one which would convince the public that Comfrey should indeed be banned.

The article which I read in New Zealand, which was published just before comfrey was banned pretty much all over the western world,  said that ‘Studies had shown that there was a relationship between Comfrey and Cancer”, because PIGS which had been fed Comfrey for three months had developed cancer.  The article did not say just how many pigs had developed cancer, and nor did it tell us what other food, if any, the pigs were fed.  I suspect that the pigs were given naught else to eat except Comfrey.

And the result of this mind-boggling manipulation of facts and figures has resulted in the drug companies gaining complete control over the healing substances in Comfrey, the main one being Allantoin.

It is illegal in New Zealand to grow Comfrey in your garden.  You cannot buy fresh Comfrey anywhere, and I think that even the herbal comfrey pills have been taken off the market.

Making it illegal to have Comfrey in your garden, because ‘research’ has shown Comfrey may cause cancer, is just ridiculous.  The only people to benefit from this ruling is the drug companies who use comfrey components in medicines and cosmetics, and who will now have increased sales of other prescription medicines because we, the public, do not have access to Comfrey.

Comfrey can be used internally and externally. It can be taken internally as a tea.  Comfrey can be used externally on skin and bones. Comfrey aids the healing of burns.  Comfrey poultices would have been useful for people who had suffered radiation burns at Fukushima.  Comfrey was often known as ‘Knit-bone’, because of its ability to mend broken bones very quickly.  It is good for all kinds of skin troubles such as eczema and psoriasis, and ulcers on the legs.   Comfrey is good for the digestion and intestines, and has been used in cases of  Ulcers, Colitis, and Irritable bowel syndrome.  Comfrey has been used to treat people with cancer, in combination with other remedies.

Comfrey needs to be brought back into household herbal medicine.  This will benefit people, rather than harm them.  Of course Comfrey could be problematic if you were to have too much of it.  But you can die if you eat too many carrots, too, and whoever would want to do that?

Comfrey never caused cancer in people, because we never had a steady diet of it for three months, as the pigs did.  Comfrey has been banned for well over a decade now, but cancer is on the increase.  Cancer statistics really have nothing to do with Comfrey.

Postscript 2 April 2013 – Well, someone commented a few months ago that they had seen comfrey for sale in NZ this season.  Then, just a couple of weeks ago, I spotted two lone little comfrey plants in our local plant store.  I bought one, and a friend bought the other. I don’t know what is happening here – have our laws prohibiting the growing of comfrey been relaxed?  Or have people simply forgotten that it was put on the ‘banned’ list?  Either way, it is a good thing that comfrey is about again.

Shop-Bought Comfrey Is Ruined Medicinally, And Is Inedible

28 thoughts on “Comfrey The ‘Miracle’ Healing Herb/Why Was It Banned?”